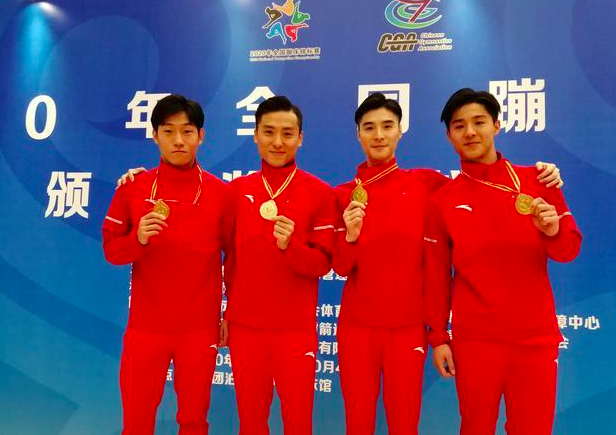 China Sports Tianjin, October 2 (Reporter Kang Shaohan) The 2020 National Trampoline Championships will continue on the 2nd. In the men's online team finals, the Shanxi team led by Dong Dong defeated the old rival Shanghai team with 178.040 points and won the championship. The Shanghai team won the runner-up with a 0.030 points difference, and the host Tianjin team won the bronze medal.

"Today I can say that both of my teammates and I performed very well. Tu Xiao is 32 years old, I am 31 years old, and Lian Shidong is 25 years old. I am very impressed after so many years, because I have experienced a lot of competitions, with successes and failures. Today, the two veterans have played their due level. The young player Lim Sidong who played last also withstood the pressure and completed his game very well. I am very happy to win the gold medal!"

Dong Dong said after the game, "The Shanghai team is our very strong opponent. They were the team champions in the last Tianjin National Games. In the past few years, the Shanxi team and the Shanghai team have been competing for the gold medal in the national competition. Gao Lei, Xiao Jinyu, Gu Ruifeng, they are all excellent athletes. I am also honored to have such a strong opponent."

32-year-old Tu Xiao was also very excited after the game. "As the oldest active member of the trampoline in China, I cherish every game and care about every gold medal. Thank you my teammates!"

"In the past, a few teammates took me (substitute) to the podium. Today I got it personally on the court. It feels very different." Lian Shidong said, the first two big brothers played very well. I am also a little stressed, and I am afraid that bad performance will affect everyone's results. Fortunately, I withstood it! "Lian Shidong has always regarded the two big brothers as role models," I think their spirit is particularly worthy of my study. In terms of technology, there is also a gap with the two big brothers. Their action specifications are very high in quality. I often watch their game videos and learn from them. "

Women's trampoline team finals exposed upsets. The two favorites, Guangdong and Fujian, both made major mistakes and missed the top three. The championship was won by the Zhejiang team, and the Hunan team and Jiangsu team won the second and third place.